Wednesday was July 4th. Nowadays, it is a day for barbeques and fireworks. But its origins are rooted in celebrating the independence of Colonial America. The date is practically synonymous with liberty. But today – from traditional print to electronic tweets – we are bombarded with news of trade wars, rising sea levels, refugees languishing at sea and in detention centers, and claims of fake news everywhere. Hardly the ideal envisioned in 1776, it can be downright depressing. 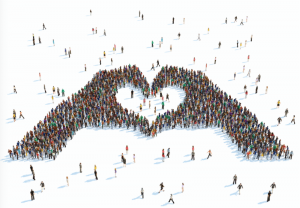 What is the best antidote? Last week, I was in Hyannis Port for the launch of a national advisory board on mental health (more on that next week), which was graciously hosted by Patrick J. Kennedy, a member of the advisory board, at the Kennedy Compound. An idyllic setting infused with history, the house itself practically sings the lessons of this most famous of Irish immigrant families. Given the tumult of our day, the proximity to Fourth of July, and the iconic images and unforgettable speeches that are represented throughout the Kennedys’ summer cottage and the JFK Museum in town, the message that sang the loudest for me? ‘When in doubt, serve.’

Ask not what your country can do for you, ask what you can do for your country. A line that most of us can quote in our sleep, this sentiment is as true today as it was in 1961 when President John F. Kennedy addressed the world in his 14-minute inauguration speech. In terms of mental health, we know that giving of oneself is good for our health. It is associated with improved mood, increased social connection, reduced stress, and increased sense of purpose. Good for mental health. Good for country.

There are those who look at things the way they are and ask why…I dream of things that never were and ask why not. Quoting from George Bernard Shaw as he launched is own presidential candidacy, Robert F. Kennedy called on all of us to be agents of a brighter future. Each of us. Enhanced agency and self-efficacy are among the most important benefits of volunteering time to serve the public good. In contrast, lack of agency and lack of self-efficacy is associated with low self-esteem, depression and anxiety. And on an individual level, recovery from mental health challenges is greatly impacted by our ability to imagine a better future and our sense agency to create it.

If a free society cannot help the many who are poor, it cannot save the few who are rich. Another quote from JFK’s inaugural address. In fact, when we give to someone else, it increases our own happiness and the benefits can be seen in our brains. Giving to others releases endorphins and activates regions of the brain associated with pleasure, social connection, and trust.

It is from numberless diverse acts of courage and belief that human history is shaped. Each time a man stands up for an ideal, or acts to improve the lot of others, or strikes out against injustice, he sends forward a tiny ripple of hope, and crossing each other from a million different centers of energy and daring, those ripples build a current that can sweep down the mightiest walls of oppression and resistance. I have written about the essential role that hope plays in mental health, Robert F. Kennedy’s “Ripple of Hope” Speech was delivered to the National Union of South African Students at University of Cape Town in 1966 on the Day of Reaffirmation of Academic and Human Freedom. Whether it is racial prejudice or mental illness hope underpins the process of positive change.

You are the stars and the world is watching you. By your presence you send a message to every village, every city, every nation. These are the words of Eunice Kennedy Shriver, Founder of the Special Olympics, at the first International Special Olympics Games held in Chicago, Illinois in 1968. With different talents and needs, we can each contribute.

A story of immigrants who went from a famine in Ireland to The White House of the United States in three generations, the Kennedys have known prejudice, trauma, mental illness, and addiction. They have also cultivated a commitment to serve. Patrick J. Kennedy continues the family legacy today. As former US Congressman (D-RI), Patrick J. Kennedy is the founder of The Kennedy Forum and tireless advocate for individuals with mental illness and substance use disorders. Quite a family playbook. Quite a reminder for us all. When in doubt, serve. Doing so has potential not only for social good but also for our own mental health.

Kathleen M. Pike, PhD is Professor of Psychology and Director of the Global Mental Health WHO Collaborating Centre at Columbia University
[email protected]

Is A Shadow Pandemic Brewing?

Thank You to the Artists